To share your memory on the wall of Florence Marino, sign in using one of the following options:

We encourage you to share your most beloved memories of Florence here, so that the family and other loved ones can always see it. You can upload cherished photographs, or share your favorite stories, and can even comment on those shared by others.

Posted Feb 18, 2020 at 12:00am
No matter what the occasion (Birthday, Christmas,Graduation, etc.), my faithful Aunt Flo's card was ALWAYS the first one to arrive at my door.    She made me feel so special and so loved ??.   I will miss our talks, and her sweet voicemessages telling me she loved me.   I am sure my beautiful Nanny Jo and my Father Robert were there to greet her when she went to Heaven. That gives me so much peace.  Rest well, my sweet angel. I will miss you always, Your neice, Linda
Comment Share
Share via:
ES 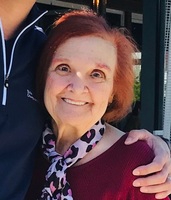