To share your memory on the wall of George Shirey, sign in using one of the following options:

We encourage you to share your most beloved memories of George here, so that the family and other loved ones can always see it. You can upload cherished photographs, or share your favorite stories, and can even comment on those shared by others.

Posted Dec 16, 2019 at 12:00am
On behalf of your brothers at the 7th st. club may you rest in eternal peace, gone way too soon but will never be forgotten.rest easy my friend 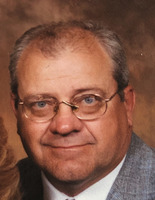