To share your memory on the wall of John Cook, sign in using one of the following options:

Jack served in the United States Marines for 22 ½ years and did two tours in Vietnam retiring from the military as Master Sergeant E8. He was awarded two purple hearts, one bronze star, and the medal of valor. After retiring he went on to work as a groundskeeper at Oak Lake golf course. He had a great love for his family.

We encourage you to share your most beloved memories of John here, so that the family and other loved ones can always see it. You can upload cherished photographs, or share your favorite stories, and can even comment on those shared by others. 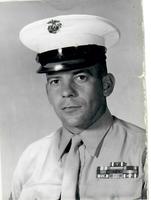