To share your memory on the wall of Margaret Draper, sign in using one of the following options:

We encourage you to share your most beloved memories of Margaret here, so that the family and other loved ones can always see it. You can upload cherished photographs, or share your favorite stories, and can even comment on those shared by others.

Posted Mar 02, 2021 at 03:43pm
How sad I was to learn of your mother's death. She was quite a lady and knowing her made my life richer. Extending our sincerest condolences. Kathy (Heasley) Hilderhoff
Comment Share
Share via:
SD

Posted Mar 01, 2021 at 05:18am
Marge was an amazing woman. Volunteering with many different organisations. She was a Girl Scout leader; she volunteered with Meals On Wheels; she volunteered at the VA and even won the Volunteer of the Year one year. She played cards with the same group of women for over 20 years. Marge was a fiercely loyal friend, mother and grandparent. Her grandchildren will miss her. She was good to me. Love you Marge.
Comment Share
Share via: 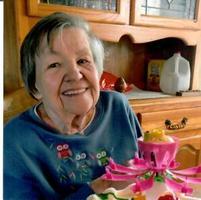